It was a night of many tweets. One conversation leading to another. Everything leading to this eventual engagement.

Interesting. @Jan4Ward1 says he's resigned from the @BtfdLibrary because he has "too many other fires to put out."

@EXPHugo which reminds me. I need to get my @BtfdLibrary card as I still have my Toronto Library card #NewtoBrantford but truly found a home

@BtfdLibrary @EXPHugo and kudos to #Brantford Library for listening, engaging and providing the details I needed for my upcoming card 🙂

The Brantford Libary had the Social Business frame of mind to engage with this new arrival to their town of Brantford.

@BtfdLibrary would love to meet the people behind the twitter handle. When would be a good time to drop by for card and IRL hello ~Rob

@TDGv Hello Rob – you can drop by the Main branch today through Saturday before 5 p.m. Ask for Paula or Tom. Looking forward to meeting you

Well I got to sit down and chat IRL with Tom and Paula.

I even picked up my new Brantford Library Card.

Let me tell you this in very clear terms.

Simply put, the Brantford Library Community Managers “GET IT”.

They understand that it is not about the number of followers, the number of web hits, the cut of one’s jib, the smell of one’s clothes, or one’s klout score.

Can you say #IRONY (see leaderboard below) 😉 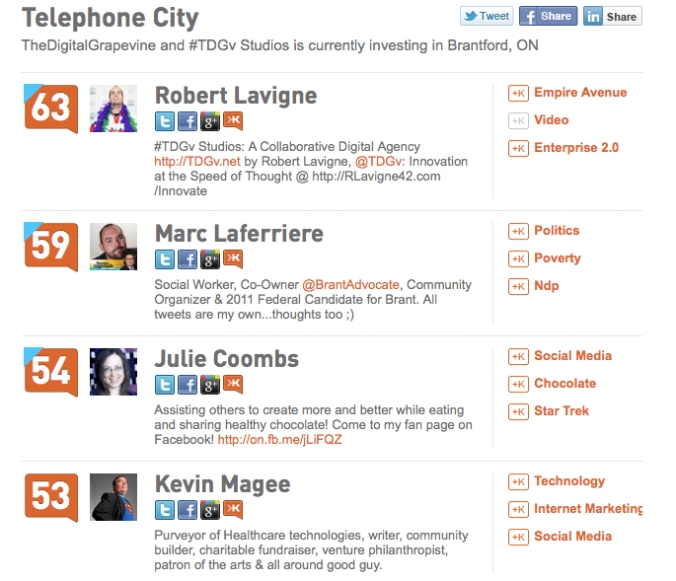 They understand that every tweet is an opportunity to engage in dialogue and expand their Social Network and TRUE Social Influence and TRUE “Klout”.

They understand that every tweet is an opportunity to expand their Social Business through TRANSPARENCY, COLLABORATION and ENGAGEMENT.

How does all this relate to Eve Mayer Orsburn’s new book “The Social Media Business Equation”?

Eve Mayer Orsburn aka @LinkedInQueen was one of the first people I started following on Twitter back in 2009, when I transitioned to my 2.0 Lifestyle.

I am connected to her on LinkedIn.

It has been a very long time since Eve and I did any form of dialogue via our shared Social Media connections, as we both lead very busy and public lives.

I have been able to keep up to date on her travels, her family life (Hello Mia), her business success and her book “The Social Media Business Equation“.

It is only fitting that the first book I have checked out of the Brantford Library, is one that I have been looking forward to read for a very long time now, Eve Mayer Orsburn’s “The Social Media Business Equation“.

So to make my point very clear to those in Brantford preaching Public Transparency and Engagement.

Don’t be an Egg, and ENGAGE with those who opt to ENGAGE with you on those platforms you opt be TRANSPARENT.

You might be surprised who walks into your door and COLLABORATES.

Good quote from T. Friedman "the days of average are over. In 5 years above avg will be over" #conferenceofmayors #Davos #futureofwork

This Social Business Podcast Series is